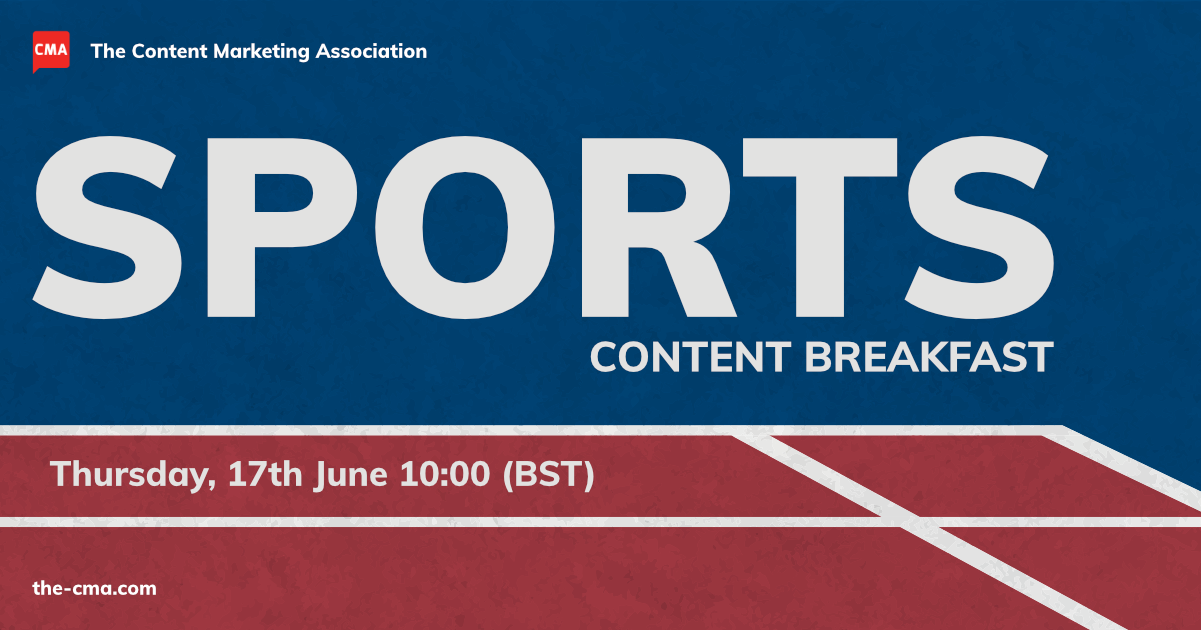 Content Breakfasts at the CMA are a series of webinars with industry experts that we host on one morning, to discuss one topic from different perspectives. The aim is to up-skill you in different areas of content marketing and provide tips and tools that you can use to enhance your own strategy.

It also provides us with an opportunity to network with others in the content community, with the opportunity to share your take on the topic or ask the speakers questions about their presentations.

We’re excited to announce a Content Breakfast that focuses on the sport industry. This event will host a panel of content marketers that work within a sector that’s said to be worth £40bn in the UK. We’ll be taking questions from the audience, as well as finding out how some of the biggest names in sport do content marketing.

Our Virtual Content Breakfast will see each speaker present for 20 minutes, followed by a Q&A where you can put your own questions to the experts. They are free for everyone to join – we’d love to see you there!

Justin works on producing, directing and editing branded content for Arsenal’s partners and the club’s own marketing and commercial content. Working on end to end content: ideation, social strategy, production and delivery of digital content. Justin develops and creates cross-platform campaigns, both paid and organic with an understanding of the influencer landscape and creating influencer lead content. Collaborating with brands/partners to create long and short form branded content for both our channels and theirs. Filming TVCs and social ads for a number of our partners. Working with in-house Partnership Development team to create short-term content-led campaigns with brands.

Dylan Davenport, The Wild
‘Bringing Baseball to Britain in a Pandemic’

Dylan started his career at Rapier during a period that saw it named Campaign Direct Agency of the decade. He then joined BMB where he launched the You Know Who Your Mates Are campaign for Carling and ran the TUI, Virgin and Sky One accounts. In 2010 Dylan moved to adam&eve where he launched YouView, won Halifax and, following adam&eve’s purchase by Omnicom, helped the management merger of the new agency adam&eveDDB. As Managing Partner he was responsible for running the Marmite, Colman’s and VW accounts, and in 2017 he led the pitch for the launch of FIFA18. The resulting ‘El Tornado’ campaign won 7 Cannes Lions and adam&eveDDB was named Cannes Agency of the Year 2018. In 2019 Dylan joined Jungle Creations to set up the social first creative agency The Wild. Since its launch in April of that year, The Wild has won clients including Accor Hotel Group, Associated British Foods, Braun, Decathlon, Bullseye Sauces, Playtika and OnePlus, as well as creating award-winning campaigns for the likes of Major League Baseball.

Ben Uttley is a filmmaker and storyteller. He founded Stamp Productions in 2008, a film production company that creates branded content and documentaries and brings great storytelling and technical skill together, in order to connect audiences emotionally and authentically with a narrative. Ben was the filmmaker and photographer behind Silver Spitfire – The Longest Flight, which resulted in an entry for Ben and the team in the Guinness Book of Records for successfully achieving the fastest circumnavigation of the Globe by a single seat, single engine piston aircraft in 2019. Silver Spitfire – The Longest Flight will be released later in 2021.

Ben’s career has earned him diverse credits both in front of and behind the camera across commercials, TV Series (Skins, Einstein & Eddington, My Family) and feature films (Captain America: The First Avenger, The Hitchhikers Guide to the Galaxy and The Four Feathers). An accomplished cinematographer, Ben has also filmed, directed and produced several feature documentaries in sport for The British & Irish Lions, and regularly writes and directs commercials for major brands including Red Bull, Honda and Land Rover.

A former content director with Publicis, where clients included Honda, Nestle, O2 and UBS, Alex is the co-founder of eric, and now managing director of its sport-focused content division Sporting Eric, which has worked with the likes of Rhino Sport, MCC, New Zealand Rugby, Golf Traveller, Golf In Dubai, Golf Gamebook and Cigna. Sporting Eric also publishes the Rugby Journal and runs Rugby Photographer of the Year

If you can’t join us live, you can still register to watch the replay of the event after the session, so you can view it back at a time suitable to you.
Check out our events calendar for more Content Breakfasts and events in 2021.

Being a CMA member allows you to keep up with current content marketing trends, help to set the global agenda, and be part of an international network of enthusiasts. There’s a membership opportunity to suit everyone, whether you’re a freelancer, brand, start-up or agency.

Want to hear more from the CMA?

You'll receive updates and recommendations on free webinars and related materials from The Content Marketing Association. You can unsubscribe easily at any time.