A couple of weeks ago Instagram made what might turn out to be one of the most significant social media announcements of 2018.

It unveiled IGTV, its new longform, vertical video, full screen platform that is available in the Instagram app as well as a standalone IGTV app. Individuals and brands have been able to upload videos to Instagram for a while but there have been limitations. IGTV addresses these and then some.

As video creation solutions provider Wochit explained on their blog, “the new platform is an amalgamation of concepts seen elsewhere – videos are shown vertically and full screen (like Snapchat or Instagram Stories), and brands or users host them on their own channels (similar to YouTube). Videos can be anywhere from 15 seconds to one hour in length and can be shared over a direct message, favourited or commented on like a regular Instagram post”

The long-form potential of IGTV has already piqued the interest of both brands and content creators as it seems to address the growing trend for longer, more engaging content, while opening up new avenues for them to explore.

“I believe in the unparalleled ability of AV to connect with the viewer on an emotional level,” says Sophie Bowen, Strategist at Cedar Communications. “So, at a time when we are being told to make video shorter and shorter to catch a tenuous ‘view’, it is an exciting move because at the very least I hope it shows a return to content less transient and a belief in the validity of longer form video on social platforms other than YouTube.”

In many ways it is surprising that it has taken Instagram, and indeed its owners Facebook, so long to develop a premium video option. Given the massive popularity of Instagram with both Millennials and Gen Z it has a huge potential audience. Secondly full-screen, vertical mobile videos with significant running times are a big point of difference with other social platforms.

There is also talk of ads being rolled out across the network at some point later in the year to increase its attractiveness to brands.

Needless to say, the usual suspects (innovative brands and media companies) have piled in already. BuzzFeed, Vogue, BBC, The Economist, Louis Vuitton, Bacardi, Cheddar, The Food Network and Chipotle have already started experimenting with the format and we are seeing musicians use it to release new tracks and indeed albums.

So why launch now? Sebastian Redenz, Head of Paid Social, iProspect believes that Instagram and Facebook had no choice as they are playing catch up. “Currently, YouTube and Snapchat provide brands with strong original content offerings, particularly long-form. In my opinion, IGTV is Facebook’s attempt to join the original content space.”

However, Sebastian also thinks that as well as increasing dwell times for Instagram to serve more ads, IGTV is actually a bit of trial run for potential future Facebook plans. Innovations like IGTV will enable social platforms to be able to distribute studio made content positioning them as a possible rival to both existing broadcasters and on demand video portals like Netflix.

“I think it is about gathering learnings and insights that help pave the way for an eventual launch of their big bet FB Watch at some point in the future. Brands will experiment with IGTV and start releasing longer edits of material used for Stories. When you evaluate the success of IGTV, it will be about key metrics such as intent to watch, watch time and retention.”

The challenge of vertical video

One of the key issues brands face is that the vertical video demands of IGTV mean that to harness the format in an optimum way they might need to invest more in their video output.

As Patricio Robles of Econsultancy explains in this article there’s no free lunch for brands on IGTV.

“One of the primary reasons for this is that IGTV uses the vertical video format. While it’s theoretically possible to repurpose videos created for horizontal formats like YouTube’s, more realistically publishers and brands will need to create content tailored to IGTV if they want to be successful. In other words, without an ability to quickly repurpose content, they will need to invest time and money in content creation for yet another digital platform.” Adam Neale, MD, Bold Content believes that IGTV will further strengthen the case for vertical video. But he agrees with the Econsultancy perspective that it presents challenges for brands.

“You can’t just shoot 16×9 video and hope that it will also work in a vertical format.” he says.  “Close ups need to be framed differently as do interviews. If in a traditional 16×9 video, you have one person on the left side of the screen and another on the right, and they’re having a conversation, then in vertical video you need to decide who to favour rather than showing both at once.  To avoid a choppy edit you need an experienced editor who can use techniques such as L cuts to continue dialogue from one person as you see the image of the other person. Hence a new vertical visual language is established.”

“Video production companies will need to be adaptable, creative, and innovative. It’s crucial that these companies are embracing the opportunities created by IGTV. Only time will tell how well IGTV does in competition with Facebook, YouTube, and Snapchat and whether the vertical format will entice filmmakers to try new things with the language of film.”

The second key issue for brands and creators is learning how to adapt long-form video to the new format. In the past Instagram has been a terrible place for long-form content claims Florie-Anne Virgile, Founder, Myth-To-Measure.

“Recently, I watched Sophia Bush’s IG story about the heartbreaking separations of families at the border in the US. She’s literally crying live after watching footage of kids in court trying to defend themselves without lawyers or just a basic understanding of what’s happening. She’s crying, it’s raw, it’s real. And she gets cut every minute. The whole experience starts feeling a bit fake after a while, because of those cuts.”

“As a content producer I think IGTV is the answer to a need that has been growing since the launch of IG live: the possibility to produce videos longer than one minute. We’ve all watched IG stories where content creators had to record or edit and cut 10 videos to say what they had to say. IGTV will prevent this from happening.

The limitations of Instagram and how IGTV addresses these have also been noted by Kevin Gibbons, MD, BlueGlass.

“IG stories are great for short snippets, but for long videos they break up into multiple clips – which isn’t the best user experience. Plus, standard IG video posts are capped to 60 seconds. So, I think there was a demand for consuming video content this way. From a publisher/marketing perspective, right now is a great chance to stand out. Getting your story watched is very competitive, but IGTV is promoted ahead of this, with less people using it so far because it’s brand new – so now’s the time to jump in and try it.

However, while there are many content creators who are very excited about the potential of IGTV others strike a note of caution.

Navigate Video believes that “if any platform can compete with YouTube, Instagram (the second most popular mobile social networking platform) is the best option.’ But they add “however, brands need to consider whether creating content for IGTV is actually beneficial for their brand and for reaching their target audience, and if so, how they are going to incorporate this new platform into their content marketing strategy. There is no one-size-fits-all approach with video, especially for a new platform like IGTV where brands are still trying to figure out how they can use it.” 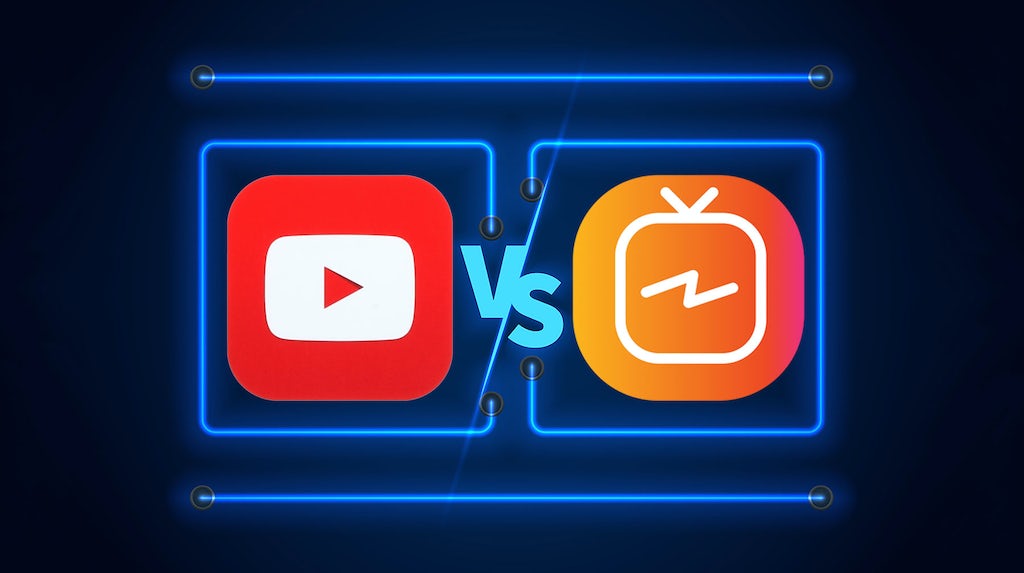 ToTheEnd believes that smaller brands need not get too excited. “With a real lack of decent discovery opportunities for those who aren’t Kim Kardashian, it might be a nice additional offering for smaller accounts to give to their audience, but such little reward doesn’t yet justify real time spent on the platform.”

No matter how it develops the arrival of IGTV is forcing brands to take another look at their video strategies. As Mats Gylldorff, European Media Partner explains, “there is a great possibility that IGTV will be a good compliment to e.g. YouTube. IGTV has a creator focus and already existing eyeballs. If you believe your audience will consume content on IGTV you should do strategic testing and share content on a regular basis and focus on quality, relevance and creative content.”

Ultimately though as Dialogue‘s Howard Wilmot adds, in order to make the most of the new format, brands are going to need to move quickly

“As with all new digital opportunities, it seems the window of opportunity is only ever open for so long before the space becomes too saturated.”

So, what do you think? Is IGTV the platform that brands have been waiting for? Or is it going to further complicate an already crowded and diffuse video marketplace?